Little Mountain C.C. ranks fifth on Golfweek's list of the "Best Courses You Can Play" in Ohio.
«

(based on 9 reviews)
See all reviews | Submit your rating

Located just 35 minutes from Cleveland, Little Mountain Country Club in Concord is known throughout the area for its bunkers. Deep hardly begins to describe them and they border both the greensides and fairways.

But golfers would never know there's a major highway nearby. That's because trees and the hilly landscape block out the traffic noise, setting up a peaceful round of golf. Little Mountain, the flagship property of Jimmy Hanlin Golf, ranks fifth on Golfweek's list of the "Best Courses You Can Play" in Ohio.

Little Mountain is the handiwork of the Dr. Michael Hurdzan and Dana Fry like Hanlin's two other courses, Cumberland Trail Golf Club near Columbus and StoneWater Golf Club in nearby Highland Heights.

"It is a really nice design," said John Blasko, a Euclid, Ohio resident who played the course earlier this summer. "It's a good layout."

Hurdzan and Fry, who split up recently, routed the 6,616-yard par 70 through a housing development but left plenty of room and natural hazards such as trees and wetlands for the homes and the course to coexist in harmony.

Their flamboyant bunkering screams "No Trespassing!" to players. Getting in one is pretty much guaranteed at some point of the round. Getting back out again, however, is no guarantee. With their deep bottoms and steep faces, the 80 bunkers are all about intimidation.

The front nine plays much short and frankly more fun than the back. The 366-yard third and the 341-yard eighth might be the routing's best two holes. Driver isn't necessary on either, although the temptation and appearance of room between all those fairway bunkers tricks most players into hitting one anyway.

The two-hole finishing stretch appears tailor-made for match play, although the day I visited, the nines were reversed. The par-5 17th hole scoots downhill over a set of cross bunkers that aren't worth taking on for most players. The 18th hole probably would be better served playing 20 yards shorter. At 481 yards from the tips (and an overcooked 452 yards from the whites), reaching the elevated green in regulation seems almost impossible. The grassy hazard and bunkers short and left of the green claim multiple victims every day. It plays like a U.S. Open hole where par is a great score.

There's a lot to like about Little Mountain Country Club. The conditioning is first rate. The fairways are welcoming for all handicaps. Some of the par 4s on the back nine are too long for average golfers, even from the white tees, but most players don't seem to mind. 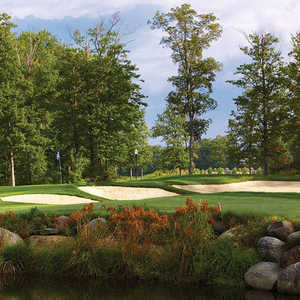 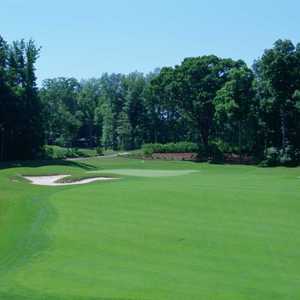