NEWTOWN, Ohio - Eighty yards from the green, a 10-year-old boy stares down the flag stick. New swing thoughts race through his head as he comes down on the ball, follows through and looks up. The results aren't ideal, as he chunks it just a few yards further than the pancake divot.

And just as the ESPN commercial currently airing states: "Without golf, this would be a walk in the park." This youngster, at Indian Valley Golf Course in suburban Cincinnati, is learning at a young age how frustrating and consuming the game will become.

Years from now, he'll walk the fairways here remembering when it took him six shots to reach the 10th green where now it only takes two. His scores will go from the 100s to the 80s, he'll play the blue tees instead of the red and he'll watch from an adjacent fairway as two little kids lug their bag, chasing after their ball as they look behind them counting up strokes, eager to get back to the clubhouse for a post-round Dr. Pepper.

At Indian Lakes, the cycle has repeated itself ever since its 1968 open. Countless kids have learned the game here. Some have blossomed into aces, while others keep it as a hobby only. But that's what the game is all about here: giving kids a chance to play all day, every day and parents the opportunity to watch them grow through a game that teaches patience, respect and tradition.

For children and adults, the course is inviting. At a junior rate of $10 until 1 p.m. it's also an incredibly cheap weekday afternoon rate of $15 for 18 holes for adults. This round provides as much value as anywhere else in the Buckeye state. Besides affordability, the course offers interest and diversion.

The course winds alongside the Little Miami River but you'd never know it because the brush has grown up thick along the banks. It brushes up against a great big gravel pit lake full of big bass. A creek winds through the course too, but rarely comes into play. And there are some rag-tag fairways and spotty blue tees that are more clover than grass.

It plays slightly more than 6,000 yards but has a decent variety of holes, many doglegs and five par 3s that vary in length and character. The red tees play very short at less than 4,500 yards, perfect for bringing Junior out for his first round (you've taken him to the range a few times first, right?)

The course has its quirks, for sure. The par-5 fourth has a length of 492 yards on the card, but anyone will tell you the hole is closer to 450 yards. The 13th is a par 4 that is close to a 90-degree angle. Anyone who tees up is tempted to fly a 3- or 5-wood over the pines and land it softly on the green. Many try, but few succeed - with their first ball at least.

Conditions won't mistake themselves for any country club, but they're playable. Greens are usually a little slower than elsewhere but are matured and usually smooth. Fairways are a little long but lack many bad patches and while bunkers have a few footprints, you won't be able to blame a bad sand shot on anything but your wedge play.

Indian Valley has a first-rate clubhouse with a view of the 18th fairway, too, through either a glassed-in eating area or outdoor patio. Along one side of the room is table shuffleboard, while in back there are dart boards.

The kitchen cranks out burgers to go along with sodas or ice-cold
pitchers of beer. Above the room is a 50-inch TV tuned to golf tournaments
or Reds or Bengals games, depending upon the season. The offerings are
surprisingly thorough.

This isn't the place to hold your international business outing. Come to Indian Valley looking for a cheap but interesting round of golf in the metro Cincinnati area. The round will be fun, cheap and that the post-round pop will be cold and in front of a big-screen TV.

It's blue-collar golf at Indian Valley, a course where kids can afford to come out to play on hot summer afternoons.

Take I-275, 32 west (Newtown) downtown Newtown to a four-way stop light (Newtown Road). UDF at corner with the golf course is on right. 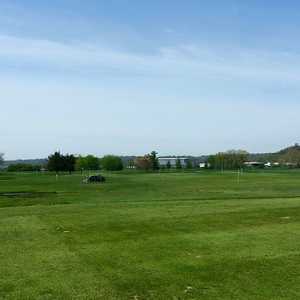 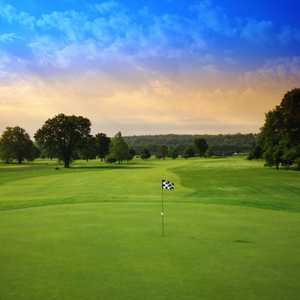 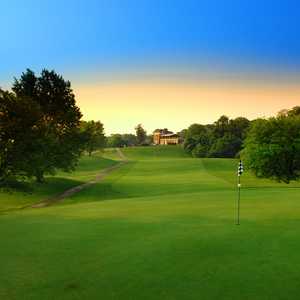