With water in play on nine holes and great views of the Ohio countryside, Indian Ridge Golf Club has plenty of game

OXFORD, Ohio -- Southwest Ohio golfers have dawn's early light to thank for a decision about three years ago -- that maybe a dairy farm wasn't the best way anymore to earn a living from these 180 acres along a ridge south of the college town of Oxford.

Located just a few miles south of Oxford, Indian Ridge Golf Club sprawls across rolling countryside sprinkled with walnut and cedar trees. It's the only course around for miles, making it the default favorite for local golfers but it's also popular for the affordable rates. The location provides peaceful seclusion as well as idyllic scenery.

Dutch and Jean Derickson spent 44 years milking cows and farming pasture here before deciding to retire and fill their acres with golfers instead of cattle and bent grass instead of soybeans. Something about those 4 a.m. trips to the barn to milk the cows that led them to consider looking for an easier occupation to fill their semi-retired mornings.

They had the land but it needed a new use, and while a housing subdivision was always a possibility, who wants 300 new neighbors in the backyard when you've grown accustomed to the autumn wind, a big blue umbrella sky and nothing else?

What helped make the decision easier were the tens of thousands of golfers who live along the I-275 beltway of Greater Cincinnati about a dozen miles south of what this ground would eventually become: Indian Ridge Golf Club.

Remnants of the old farming way still remain for those with a wary eye. Most of the first nine holes were etched from open grazing pasture and spread out across a ridge that has a forever-view looking north toward the tiny college town of Oxford, home of Miami University.

The backside dips through swales that are wooded but still plenty open. That's one of the attributes of this course, too. There are few trees on many of the holes, though plenty of saplings have been planted along a couple stretches of rough.

In the fall, that is a great thing for the average golfer. Few trees mean fewer leaves, the nemesis of autumn golf. In fact, this may be the best course in the region to play when the leaves turn colors because at least half of the front nine holes, though plenty challenging with water coming into play along six of them, have few or no trees nearby.

And when the wind sweeps up out of those Ohio dales and valleys below, what few leaves there are on this course get chased away.

Doug Eakin, Director of Golf, said most scratch golfers find the track enough of a challenge to return time and time again. It is a fun round for the good golfers, too, as all par 5s are reachable from the blue tees for those with big swings.

"People are going to get a look at some birdie putts," he said.

This course is home to Miami University's golf team, and its handful of blind tee shots, because of swales and valleys, must be a blessing in their Mid-Atlantic Conference matches. For instance, they ought to name hole No. 6 "Justice," because like justice, it is blind from the tee, although a white stake shows the way.

Like most courses, the starter usually has some of the best ideas about the 18 holes that are to come, and for starter Mick Urban, one of the treasured features of this lay-out, designed by Brian Huntley, is that most holes give golfers a "run-up" choice.

That is, greens usually have a tight skirt of fairway in front that allows golfers to roll it up Scottish-style. It's old school golf and great for anybody who does not have tremendous short-iron hang time.

He has another observation to make about Indian Ridge Golf Club, and anybody who sends out golfers from 7 a.m. until 4 p.m. on any given Sunday has plenty of built-in credibility and ought to be heeded.

"Greens are fairly firm and putt beautifully," he said. Indian Ridge has bent grass tees, greens and fairways and the turf is full and thick.

But first you have to get to the greens to putt on the greens. Getting there at Indian Ridge Golf Club is a little easier than at most courses because each cart comes equipped with a GPS, a handy gadget hung from the roof of the car that offers plenty of information.

The system tells you at a glance exactly how far you are from the green, gives a snapshot look at how far you've come, and in general, gives you something to fuss with while waiting for the foursome ahead to make those two-foot putts.

A couple of holes are memorable: the par-4 seventh hole is a dramatic dogleg over water, a 311-yard poke from the blue tees when following the middle of the fairway but much less for the big hitters who like to send the ball right at the flag from the get-go. No. 12 has a cryptic sign suggesting that golfers have a choice of greens. Fire away and figure it out later (only one of the greens will have a flag but you don't know that from the sign, which is okay, because surprises always keep a round of golf interesting).

"I think many times the scratch golfer comes away from a course feeling unsatisfied," Eakin said. "The course is going to only get better. It's a matter of time but even now people talk about the playability of their round here."

But with water coming into play on half the holes, sand that is fluffy in plenty of fairway traps and great views of the Ohio countryside, this course already has plenty of game. 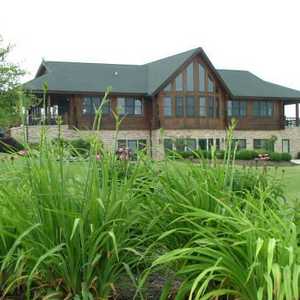 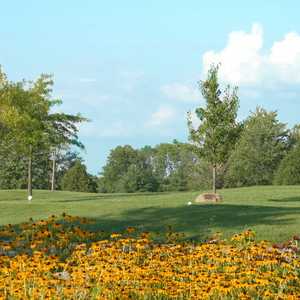