LAGRANGE, Ohio - When you finish your round at Grey Hawk Golf Club, you may find yourself quoting one of the lines from the movie, Animal House: "Thank you sir, may I have another?"

In the movie, the line is said by pledges being paddled by older fraternity brothers during an initiation ceremony. Playing Grey Hawk won't hurt any less because of the immense challenge it offers, but you'll be begging for more because of the stunning beauty of each hole.

Robert von Hagge of von Hagge, Smelek and Baril, the golf course architect corporation that designed Grey Hawk, was quoted as saying that "the average golfer only spends 13 minutes in an entire round hitting a golf ball, so he better have something nice to look at." With such a design philosophy, it's no wonder his firm was able to create a work of art in this little farm community in northwest Ohio.

Grey Hawk has all the characteristics of the other von Hagge course in the area, Red Tail Golf Club in Avon: mounds, grass bunkers, gigantic sand bunkers, lots of water hazards. The difference is that while Grey Hawk is part of a residential community, there's far more room between the houses and the course than at Red Tail.

So far, the feedback from local golfers has been very positive.

"This is a great course," says Mike Stanic, a 20-handicapper who quips that he was a 12 until joining Grey Hawk. "It has intimidating views, but it's very playable for the high handicap if you don't take the tempting but risky shots."

What also helps the high handicapper is that most hazards on each hole are on the left side, playing away from the typical golfer's slice. As descriptive signals, which lead architect Mike Smelek calls them, those hazards scream, "Hey, don't hit the ball here," to hackers from the tee. But little good that will do for those who have no idea which direction their shot is going to go.

"The course is very challenging, but I think you could play it three times a week for an entire season and never get bored with it," says Rick Ginebaugh, an 18-handicapper who manages to squeeze in 30 rounds a year despite being in the air a lot piloting jets for Continental Express. "It plays very different from one side of the fairway to the other, with the bunkers and water coming into play depending on where you end up. The grass bunkers on No. 12 are something you don't see very often on courses around here. In fact, I can't think of another course that has any at all."

Forget the grass bunkers, Grey Hawk as a whole is a course unlike any other in the area. No detail was too small for the von Hagge team to ignore. Looking back down the fairway from each green, one can see the results of the painstaking earth shaping that was done here - the fairways have subtle ripples in them like water, so it looks as if they're moving. Beach bunkers on various holes flow straight into water hazards, giving the course a coastal feel.

Thrill seekers will love the third hole, a 328-yard par-4 with a green surrounded by a continuous bunker. Ironically, it doesn't come close to being the toughest hole on the course, unless of course you're totally inept at sand play.

That honor goes to hole No. 7, a 549-yard par-5 guarded by water all along the left side. Off the tee, linksters have to avoid hooking the ball into the water or slicing into deep woods on the left. Even if you manage to safely lay up on your second shot, you must negotiate a ravine that turns in front of the green and more water lurking to the left of the green that will gobble up any errant approach shots. No. 7 is regarded as the start of Grey Hawk's own "Amen Corner," with Nos. 8 and 9 offering a stiff challenge as well. The 388-yard par-4 No. 9 is Grey Hawk's own version of Harbour Town's "lighthouse hole," except you aim for distant grain silos that the bulldozers left untouched.

Five tee placements truly do make Grey Hawk friendly to all golfers. Not only do they make the course playable for shorter hitters, the tees are positioned so as to make some holes less intimidating. For instance, if you hit from the grey tees on No. 5, a par-3 of 177 yards, your ball has to carry water all the way to the green. If you tee off from the whites, however, the water almost doesn't come into play.

Forget whether you're a scratch golfer or not - people should just play Grey Hawk for the beauty. If you're going to embarrass yourself, you might as well go out in style. You won't believe you're in Ohio when you play this course - think South Carolina or Florida. And unlike some courses that promise to deliver a "country club" experience, Grey Hawk delivers with a mammoth clubhouse that features a spacious locker room, top notch pro shop, patio seating overlooking the 18th hole and a five-star eatery run by a chef who used to own her own restaurant in the trendy Tremont area.

Grey Hawk features an island green and a green completely surrounded by a continuous bunker. 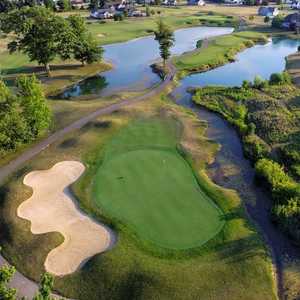 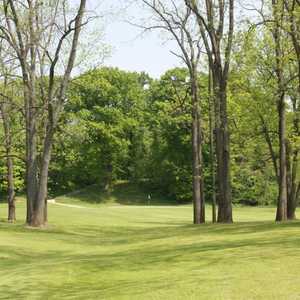 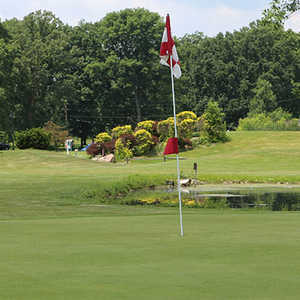