That's right. One hole, 610 yards. The faint of heart need not apply.

St. Alban's Golf Club is the place for this monster par five, and you'd better bring your driver. Even from the white tees, St. Alban's 17th hole plays 550 yards.

But before you decide to play somewhere else just to avoid embarrassment, think again. St. Alban's is an above-average public golf course. The cost is low, the design is challenging, the area is tranquil, and the 17th plays downhill - well, at least the approach shot does.

St. Alban's is unusual for a central Ohio course because it has hills. Real hills, too, not those wimpy mounds that many courses call hills in the flatland that is central Ohio.

St. Alban's was built in 1987 by course manager Tony Price, but the layout doesn't smack of amateurism at all. You occasionally have to duck a ball flying in from another fairway, but when you hit the back nine, you're transported into a new world of trees, hills, and golf challenges.

What you don't run into is a lot of people because St. Alban's is off the main track; it's one-and-a-half miles north of Alexandria, 31 miles northeast of downtown Columbus. The surrounding neighborhood includes farms, a truck-repair Service, and a small business that sells Chrysalis Amethyst Healing Stones. (There's no truth to the rumor that the stones help on the 17th hole.)

There are a few problems for the average golfer. The signs on each tee box show no hint of the direction of each hole; you'll have to consult the diagram on your scorecard on a regular basis. Many shots on this course are blind, including several tee shots, and if you don't know where you're supposed to go, you can get in big trouble.

St. Alban's is also a "feel" golf course. The only yardage markers on the course are the plaques at 150 yards; if you're not close enough to pace off your yardage, you'll either have to rely on your ability to "feel the shot" or just downright guess. On the greens, feel will be important as well. The greens are slow but subtle, with small mounds that sometimes leave you clueless about the direction of a putt.

There's also a dearth of drinking water on the course. There's a drinking fountain available about halfway through each of the nines, but that's not enough to get you from getting dehydrated - especially if you're walking. Take at least one bottle of water.

But from the first tee shot on, you won't regret playing St. Alban's. The first hole dips so suddenly from the tee that you can't see the fairway of this 322-yard (from the whites) par four that doglegs left. But you can see the green, and if you're a big hitter, you can drive it; just avoid the bunker on the left side of the hole that guards against just such attempts. If you lay up, you'll have no more than a short wedge to a long but thin green.

Take advantage of the ease of the first hole because the second is a lot tougher. There's a pointless pond in front of the tee that serves no purpose other than to intimidate poor golfers, but once you clear that, this hole is 392 yards with a dogleg left.

A good driver will leave you with about 150 yards to the heart-shaped green, which is the opposite of the first green - wide but not very deep. When the pin is tucked on one of the upper cheeks of the heart, it makes for a tricky approach.

After a fairly simple par three, the par-four fourth continues with the blind shot theme. The fairway rolls on this 372-yard hole, and your tee shot will finish at the bottom of a hill. As you walk off the tee, size up your shot and pick a target for your approach because you won't be able to see the green when you reach your ball.

Price played tricks with your eyes on the par-3 sixth hole as well. It's 162 yards to an extremely wide target, but there's a large tree guarding the left third of the green. The tree is so tall that you feel like you need a wedge to clear it, but you don't. The tree is actually a good distance short of the green, but going for any pin tucked behind the tree would be a mistake in course management (in layman's terms, that means it would be stupid).

There's also a pond tucked in a valley left of the tree, and you won't see it until you walk to the hole. Hit the middle or right side of the green, two-putt for par, and enjoy your walk to the next hole.

At the seventh tee, though, remember that you love a challenge. It's a 531-yard par five - 585 yards from the blue tees - with out-of-bounds along the right side. You can't bail out too far left, though, because you're hitting through a tunnel of trees.

And forget about reaching the green in two. The hole plays uphill, the green is too small to hold a long iron or fairway wood, and there's a pond lurking - blind to your eye, of course - immediately behind the green.

Things get even tougher on the par-four eighth hole, especially from the blue tees, where it's 471 yards. The whites play just 423 yards, but the green is another small, heart-shaped affair that prefers wedge shots. If you're playing anything longer than a nine-iron on your approach, aim for the left side of the green and try to bounce the ball onto the putting surface.

The ninth is the second par-five, a more manageable 503 yards (527 yards from the blues). The tee shot is again through trees to a fairway sloping uphill.

Your second shot will be - you guessed it - blind, and the green is again small. It's protected by mounds to the left, right, and back of the green, but there is an opening in front where you can run your ball onto the green. Once you're there, you'll battle an even greater foe - the mesquite smoke from the nearby grill. If there's an outing in the pavilion, you'll need to hit the ball between coughing fits.

The 10th hole is the most majestic on the course. It's 410 yards severely downhill, and to get to the green, your approach shot must travel over a creek and through woods on either side of the fairway. From the tee, the hole looks gorgeous.

But even if you make a big score on number 10, you'll enjoy this part of the course. The 11th is a 375-yard par four that doglegs sharply to the right, then climbs to an elevated green - two extra clubs of elevation, at least - surrounded by a drop-off to the left and right. And if you hit your approach short and left, there's a strand of trees that will gobble up your ball.

One member of our party actually hit his ball into a pine tree, where it nestled among the needles and never came out. It's probably still there, causing a mother bird to wonder if she forgot to hatch one of her eggs.

The 12th hole is a 152-yard par three that again travels downhill between trees. Your tee shot has to clear a pond about halfway to the target, and large mounds surround the long, thin, diagonal green.

The only place to miss the green and still have an easy pitch is short of the green; anywhere else, and you'll have a downhill pitch off a downhill lie. And because the green is so thin, almost every pin position will seem like it's tucked away.

The 13th hole is a simple par-five from the whites, 480 yards, with out-of-bounds on the right side. A creek crosses the landing area for your tee shot, but you have to hit the ball flush to reach it - especially from the blues, playing 560 yards. But if your tee shot is in the fairway, neither this hole nor the straightaway par four 14th causes many problems.

That's not true at number 15. There, you're trying to hit a green tucked into a nest of trees. There's a creek that goes completely around the green, and if you're offline by just a smidgen, you're staring at double-bogey. But the hole plays just 105 yards from the whites, 145 yards from the blues. If you ignore the trouble and make a good swing, you can enjoy the shade as you stroll to the ball.

The biggest challenge on the par-four 16th is probably surviving the walk to it. Where 15 plays in a valley, 16 plays on top of a hill. If you're walking, your heart will be pounding by the time you reach the tee. Forget the honor system; first one to catch his breath gets to tee off.

You've caught your breath by the monster 17th, but your heart will still be beating so hard that you could count the beats by watching your chest bounce. The tee shot is actually pretty simple, especially if you don't try to swing too hard.

Be happy with putting your ball in the fairway, no matter how far you are from the hole. The second shot is blind - gee, what a surprise - leaving you to imagine all sorts of horrible fates for your lay-up.

All you can see is a dip in the fairway and trees in the distance. The green will be slightly to your right, but ignore the temptation to cut the corner. Instead, stay left and hit it down the middle of the fairway. If you catch this shot flush, your ball will disappear past the dip and roll down a hill so steep it could probably double as a ski slope in the winter.

The roll will leave you surprisingly close to the green - maybe even within 100 yards - and you'll be stunned by how quickly you've covered five football fields.

The 17th features two greens - one lower and to the left - and your approach from the fairway will be simple. By this point, a par doesn't seem so hard, and you'll walk away feeling Tigeresque. (Until, of course, someone reminds you that Tiger would've hit the hole in two with a three-iron and probably made eagle; if that happens, leave that person home the next time.)

The 18th will take the shine out of your eyes, though. It's 153 yards uphill - and we're not talking about a gradual slope, either. The green is so high that you can't see it. You might see the flag, but just barely.

This is just another of Price's blind shots that requires faith and discipline. Aim left of the large pine tree by the cart path, hit the ball high and straight, then dig in your heels as you trudge up the hill.

Either way, St. Alban's will be the kind of place you want to experience again, especially since the next time you'll know where each hole is actually going. 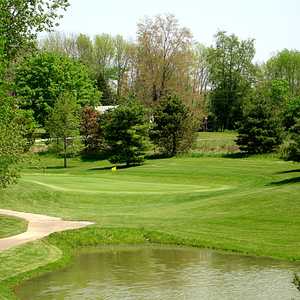 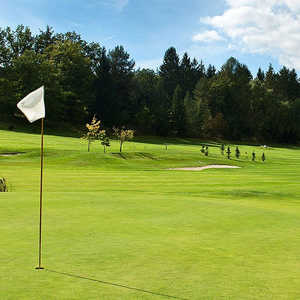 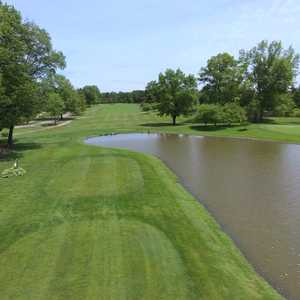