Hueston Woods Golf Resort & Lodge: A Place of Respite in the Buckeye State

Oxford, OH - While there are plenty of birdies at most golf courses, not just any old coarse can make this boast: a tamed wild turkey for a mascot, a bird that disappears for months at a time and then re-materializes.

A turkey that the staff at Hueston Woods Golf Resort & Lodge cynically named Wishbone about three years ago has returned home. The course is 18 holes on what was once doubtlessly a rural cow pasture, corn field and soybean farm just north of Oxford, Ohio, in the Southwestern Corner of the Buckeye State.

Is it a cosmic irony that a golf course that consistently places in the top 10 percent of public golf courses in the United States for conditions and play should have a turkey as a mascot, a turkey that seems to disappear about every Thanksgiving? Because, after all, aren't most golfers, well, turkeys?

"We've all been worried about Wishbone," is all Scott Tobias will say about the disappearance of the bird late last fall. The bird's return on this recent winter Saturday morning is clearly a good omen for the coming spring and summer golf season.

Mr. Tobias, an employee of the Ohio Department of Natural Resources, which owns and maintains this course, is first to the clubhouse most Saturday mornings. He always arrives before dawn, and that is really the best time to tee-off - with or without the turkey called Wishbone.

That early arrival gets you out on the course before all the other golfers from Dayton and Cincinnati arrive - cities about an hour away.

Architect Jack Kidwell designed the course that winds through cherry, locust and walnut trees, which explains all the fox and gray squirrels. It opened in 1969 at 7,005 yards from the blue tees and 6,727 yards from the whites.

Play this one from the blue tees. It's much nicer back there, fewer divots, and the yardage giveaway on most holes is meaningless. While conditions are fuzzy in the early spring from a winter of play - long grass on the greens, some ground under repair here and there - overall, the course offers play suited for golfers of all levels.

Some fairways are oceanwide while others are slivers with hardwoods protecting landing zones and greens. The negative column is short: Hueston Woods has too many doglegs, the par 4s are generally too short and there aren't enough sand traps.

But what this course offers is something few courses these days can deliver: Zen serenity. The course is far from the suburbs and cities and tucked into a state forest on one side and has Ohio farmland reaching to the horizon on the other side. It is a place of respite from the sounds of the work-a-day world.

Before you leave the clubhouse, buy the tip book, of course, for its yardage clues, which count off landmarks on each hole in 10- or 15-yard increments (and keep an eye out for Wishbone, who haunts the fringes of the forest).

At 7:30 a.m., the only sound is the wind through the hardwoods and every 10 minutes or so, a pick-up truck rolling down the road, a distraction that is frequently more than a quarter-mile distant but with silence everywhere, it can seem much, much closer.

The first two holes here are forgettable. Number 1 is a bending par five with a stand of shagbark hickory guarding the first green. The second is one of those annoying 384 yard doglegs with a tight-fairway that calls for the golfer to launch a long iron followed by a short iron to a green protected by a pair of traps.

Watch for the flag location on No. 3, a 208-yard-long par three, and don't stray left on No. 4 because you're out of bounds, a rarity here. On this morning, a pair of deer grazed in the fairway about 220 yards distant. When an absolutely crushed Titlest landed 40 yards beyond them, their ears went down and each scrambled for nearby scrub. But they did not completely scamper away. In fact, they were only 20 yards off, a silent gallery that watched a meager approach shot to a green that was begging for just one sand trap. A golfer has to wonder: Are these deer tame enough to have names, too?

The fifth is a 422-yard-long challenge and the tip book has a flat-out flaw: "bunker right is not seen off the tee." But isn't that a bunker out there to the right and aren't I standing on the tee? Sometimes the tip books hold mysteries beyond comprehension.

Play moves along briskly at Hueston Woods because although nearly every fairway is protected by 50-80 hardwoods or pines, and the area under most trees is mowed tight to the trunk. Nobody will spend a lot of time looking for lost balls here because actually it's hard to lose your ball.

Look for a Meadowlark to kick up from the rough on seven - a 548-yard par 5 reachable in two with a big drive down the left side. After a mostly forgettable No. 8, the No. 9 is yet another dogleg. Pound one over the right corner trees for a half-wedge to an up-and-down birdie. You don't have to be Tigeresque on this one to get tight in two.

The best thing to do is get on with it to No. 13 and keep in mind this koanlike advice from the tip book: "Hit it where you can see it." Check out the three-story historic barn with its trio of arched windows as you tool down the fairway, too.

While No. 15 has a wide, expansive, broad and all-together benign fairway with no trap or water in sight, watch for the wind and think knockdown five iron to the two-tiered green. The round finishes out with a nice trio: No. 16 is an all-water, all-carry signature hole, a par three with a 175-yard carry, another dreaded dogleg at No. 17, which has a lake of barking geese heard from two holes back and the par 3 finisher, again across water.

Wishbone was not the only animal to return on this particular Saturday. A skunk decided he needed to take up residence under the clubhouse. And after he was captured - Rick the Volunteer said the clubhouse gang was going to name him after the Governor, Bob Taft - he was released to the woods down by the second green.

A turkey named Wishbone, a wayward skunk named for a governor and golf in the secluded dells of a former farm - that's a tough trio to beat on an Ohio morning in the spring. 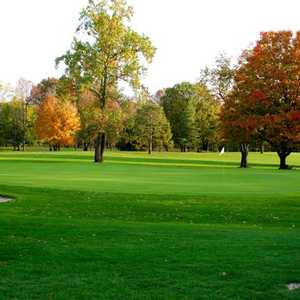 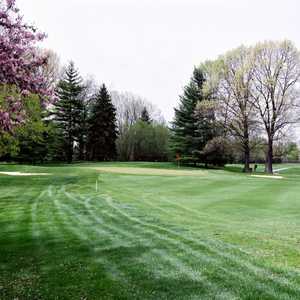 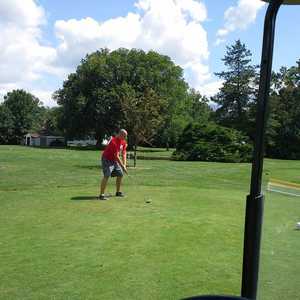