In search of 'transcending' golf club at Walden Ponds

INDIAN SPRINGS, Ohio - Transcendentalism, the term coined by Henry David Thoreau in his famous book "Walden" strikes a blow against society and modernization. It's at Walden Pond where he becomes one with nature and discovers that his current way of life - as well as most others - is nothing but an "improved means to an unimproved end."

Okay, so that Walden Pond was in Massachusetts, but the Midwest version of Walden Ponds in Indian Springs is certainly on the same page. The course takes up 500 acres of land, about halfway between the metropolises of Dayton and Cincinnati in southwest Ohio. Though not a minimalist shack, the clubhouse is a historic mansion built back around the same time of the novel.

Once considered the kid sister of nearby Shaker Run - both are owned and managed by Vintage Golf Properties - Walden Ponds stands on its own, as it has finally blossomed into a top course in the area. The course itself is no pushover (74.1 rating from the back tees) and a bad day may have you searching for any nearby cabins to run away and hide in and contemplate your existence. The course was built on an estate once owned by Gordon Soho Rentschler, a former president and chief executive of CitiBank who came here to relax when he needed to substitute New York's concrete jungle for suburbia.

The layout leaves little tricks for first-timers to the course. It has few blind holes and many distinctive touches, most having something to do with trouble and usually the trouble stems from the quiet water of a little pond.

On the 13th, field stone slabs punctuate both sides of the broad fairway. Cascading bunkers atop one another on either side of No. 8's fairway and a giant one behind the green gives this hole a sense of inevitable doom.

In fact, No. 8 is the only green with a single trap on its edge. The others have two or three, and No. 18 climaxes with four.

Water is not spared on this course, either, as fairways are a crisp and brilliant green with few blemishes, offset by the drought-like conditions of the long rough and natural fairway grasses that line most holes in August.

There are other compelling features at Walden Ponds. Deep-faced bunkers are everywhere and some fairways like No. 16 are littered with them. Of course, Walden Ponds has large greens that have become a consistent theme of modern-style course designer Michael Hurdzan.

The course winds through and past seas of roofs in a nearby subdivision but the houses aren't distracting on every hole. The natural grasses bring in plenty of red-winged blackbirds and the dozen or so ponds lure ducks and predators like red-tailed hawks and owls.

After one summer weekday round, Ron Kollar, an independent real estate appraiser, said he was most impressed with the par fives. What made them fun, he said, was that they were not beyond the driver/3-wood combo that most golfers wield when seeking eagles.

"If you hit two great shots, the par fives are all reachable, especially No. 10 and No. 18," Kollar said. "It's nice to step to the tee on those holes and think that maybe you have a chance at an eagle but that the hole has length enough to make it a challenge."

Kollar's favorite hole might be No. 9, he explained, a tough 187-yard carry from the blues across a splendid little valley. He said it looked like a classic Roi Dan hole with an elevated green and protected on the left by a big, deep bunker that cascades down below the hole, virtually all the way into the woods.

From the bottom of this splaying bunker, it's a 12-foot sheer pitch back up to the green - enough of a challenge for any scratch golfer and too much of a challenge, probably, for the bogey shooters out there.

Golfers here can spring $5 for a GPS monitor and it would come in handy for each foursome to have at least one of these high-tech guides.

Conditions are solid at Walden Ponds with consistent attention to detail - many examples of courtesy and service from the driveway turn-around to the 19th hole beer tap - management is able to offer a series of prices for a variety of club memberships. Season memberships start at $600, so even if you're jumping along with Thoreau's theory, you still may want to keep your day job if you want to play.

Green fees are $44 for 18 holes and a cart Monday through Thursday. The cost jumps to $49 on Fridays and $56 on the weekends, which includes range balls. The course also offers a Monday-Friday twilight rate of $35 after 4 p.m. and a super twilight rate of $25 after 6 p.m.

Some of the specials have an appeal that makes this course something of a poor man's private country club. A platinum level of $2,000 tops the special offers with unlimited golf and a lot of other perks, but others go all the way down to a 12-coupon book for $495.

That coupon book is perfect for any group of golfers who know they will play here at least once a season because it just about halves the regular rate for green fees.

Getting to a course is always half the challenge of a day on the road, but that's not a worry here as a new highway makes the drive a quick straight-shot off I-75. For information on how to get to this course on the edge of the city of Hamilton, log on to the Web site at waldenponds.com/Images/img_locationmap.gif.

Check out the Rossville Inn just down the road in Hamilton, which features a historic district that offers a little opulence and a relaxed and quiet atmosphere for post-round recuperation. Tel. 888-892-0871 or e-mail rossvilleinn@nrci.com.

Oxford, the home of Miami University is just a few miles down the road and that city has a lively and thriving performing arts community, too, if any golfer is thinking about making this trip to southwest Ohio a weekend-long excursion this fall.

The other major reason to come to this course is but a mile down the highway into Hamilton then onto High Street and across the Great Miami River south two miles to Pyramid Hill Sculpture Park and Museum. This collection of outdoor art is literally unsurpassed in the world - well, maybe the Guggenheim has a nicer collection.

The collection includes work by Tony Rosenthal, Tom Gibbs, Marc Mellon and many others. Here, too, visitors can find a Sunday afternoon concert series in the outdoor amphitheater. For more information, log on to pyramidhill.org/main/magic/main.cgi?a=1. 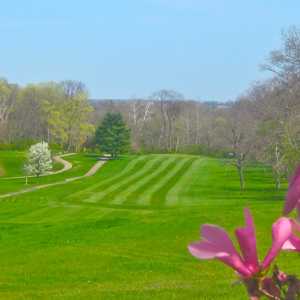 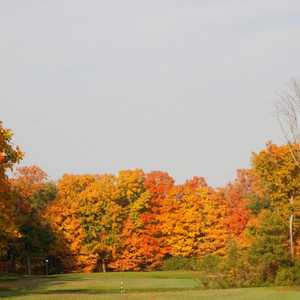