COLUMBUS, Ohio -- Dr. Michael Hurdzan remains a national name when it comes to golf course architecture. The past president of the American Society of Golf Course Architects has designed a course that will host a U.S. Open and sprinkled great tracks from Naples, Fla., to Canada.

Hurdzan, his longtime design partner Dana Fry (who joined the firm in 1997) and Ron Whitten all had a hand in Erin Hills in Wisconsin landing the 2017 U.S. Open.

For all his travels, Hurdzan, based in Columbus, has made the biggest impact in his backyard. Central Ohio golfers appreciate his straightforward approach, one without gimmicks or treachery.

"There is a lot of Hurzdan-Fry in the area," said Josh Boggs, the head professional at Westchester Golf Course, a Hurdzan solo design in Canal Winchester, southeast of Columbus. "People are used to that (look). They feel a connection.

"They (Hurdzan-Fry) are known for big open fairways, some water, lots of bunkers, new designs, big greens with not a lot of undulation. There are no hidden shots. What you see is what you get."

Hurdzan (and Fry) continue to influence the local golf scene. The firm's $3 million redesign of the city-owned Airport Golf Club will give the original Jack Kidwell course a rebirth of sorts in 2013. If you were picking an all-star itinerary of Hurdzan’s work around Columbus, start with these six courses:

Cumberland Trail Golf Club is a Hurdzan/Fry design that opened in 2000. The 7,205-yard playground, located roughly 22 miles west of Columbus, features two distinct nines: a more forgiving, open front nine and a tougher, tree-lined back nine built around 40 acres of wetland. Cumberland Trail boasts, without a doubt, the best public course greens in central Ohio. Their A4 bentgrass surfaces run faster than Virtues Golf Club on a regular basis. "The front nine is more of a links," said Mike Pickett, the head professional at Cumberland Trail. "The back nine has more hazards and tight landing areas. I like the back a lot better."

Royal American Links was built to be a private club, so all the pieces of a great golf experience are there. The 18,000-square-foot clubhouse does its best castle impersonation with a stone exterior. Hurdzan gave the course a links feel on 143 acres of mostly flat farmland and woods. Fescue grasses -- not houses -- line many of the holes. Where it deviates from the links theme is all the water in play. "The course is a lot of fun to play. It is challenging every day," said member Larry Conti. "There are some nemesis holes and ones you can score on."

This 7,120-yard Hurdzan design dating to 1997 features six lakes and more than 75 bunkers as obstacles. The back nine ups the ante and moves into a more intimate natural setting away from the subdivision homes. "The last three holes are solid," Boggs said.

Cooks Creek Golf Club, co-designed by Hurdzan/Fry and pro golfer John Cook, thrills golfers with a natural setting near Little Walnut Creek and the Scioto River 18 miles south of Columbus. Water comes at players hard out of the gate at holes 1-7 and roars back at No. 17 and No. 18.

At 6,508 yards, the par-70 EagleSticks Golf Club might be the shortest course in the country that still ranks among the best courses in its state. Hurdzan was handed 150 acres of rolling rural land east of Columbus that was perfect for golf. With more than 100 feet of elevation change, panoramic views from elevated tees are its signature.

Golf Club of Dublin in Dublin

The 7,201-yard Golf Club of Dublin touts itself as "the only true links experience in the Midwest." That may be a stretch -- with Arcadia Bluffs in Michigan and Whistling Straits in Wisconsin both hugging Lake Michigan in dramatic fashion -- but this is still a pretty good substitute for playing overseas. Sod wall bunkers and fescue give it that links look. A Tudor-style clubhouse completes the Irish theme. 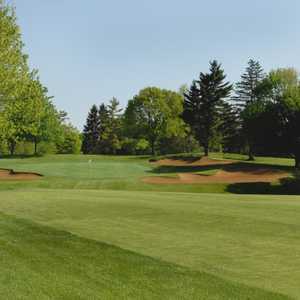 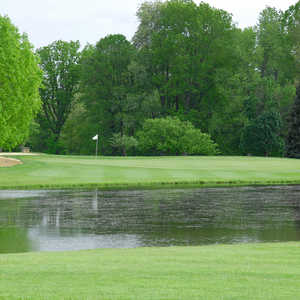