That may sound impressive, and it's true that the public course (country club just sounds better) got a 3-1/2 star rating from the magazine. But there's nothing to brag about your course being the focus of an article entitled, "The Search for the Worst Golf Homes in America."

That's right. In its July 2002 issue, Golf Digest featured the home of Jeff and Ellie Ward, which sits next to the tee box of hole no. 3 at Roses Run. The problem comes when golfers reach the fourth hole, a 385-yard, dogleg-right, downhill par 4 that makes nearly a 90-degree right turn. Some try to take the shortcut over the corner of the Wards' property and hit the green, which is possible with a 250-yard drive.

So, is this a good thing or bad thing? Most would say a bad thing. Roses Run represents the epitome of over-the-roof, down-the-chimney, out-the-screen-door, through-the-yuppie's-legs, and into-the-hole kind of golf. According to Director of Golf Bob Erdmann, the course was originally a horse farm owned by oil tycoon Ed Barr who in 1996 had a change of heart and decided to develop it into a residential golf community. The only remnants of the stable days are an airy, barn-like clubhouse and party rooms with names like Derby, Preakness and Belmont. Not a horse can be found on the property, just...houses. Big houses. And lots of them.

Oh, and planes. Well, not on the property, but flying above it. The course is located very close to Kent State Airport, so air traffic is pretty steady. Those with the concentration of a kumquat needn't worry, though, because we're not talking jumbo jets here. More like single-engine Cessnas and smaller private planes, which make for a welcome distraction while your buddy studies the line of his putt for the fifth time.

So what about the course itself? The natural, rolling terrain of Roses Run offers up a challenge worth taking. Perhaps never before has there been more of a severe dichotomy between front and back nines. The front is Dr. Jekyll: spacious, open and straightforward. The back is Dr. Hyde: lots of doglegs, more hazards, and very narrow fairways. I don't know about other golfers, but I'd prefer a course to be equally tough or easy on both nines. There's nothing worse than shooting the lights out on the front, then having all that momentum stripped from you in a humbling and humiliating manner on the back. I want the challenging holes interspersed throughout the course, and Roses Run doesn't do that.

But there are those who look beyond the unfairness of the imbalance between the nines at Roses Run and just appreciate the sheer beauty of some of the holes. One person like that is Bob Newman of Strongsville, a retired BP engineer and avid golfer with a 14 handicap. He loves Roses Run, and one of the reasons is the scenery.

"One of the most beautiful holes I've ever seen either in person or on television is number 12," Newman says. "The landscaping of the house behind the green really makes the hole."

There we go talking about houses again. Let's forget about the houses for a second. The par-5 516-yard No. 12 offers an extremely difficult tee shot to a narrow downhill landing area. The second shot takes you over a creek bed to a small landing zone protected by the creek and a pond to the right of the green. I agree with Newman, but the only thing that ruined it for me was a bright yellow excavator parked midway down the hole on the left of the fairway.

Newman plays nearly 50 rounds a year, and he puts Roses Run in his personal top 10 list in Ohio. Other things he likes about the course? ?The ladies? tees are far enough ahead to give them a true advantage, unlike some other courses where they're a few paces in front of the men's," he says. "And I'd rate the conditions a 7 or 8 out of 10."

Ah, yes, the conditions. For the most part, they were disappointing. A clover outbreak made it look like there were small heads of lettuce dotting the fairways. The tee boxes were nothing to tell Nicklaus about, and the bunker edges were ragged. But what almost made up for all of that was the greens, which were almost impeccable. Fast and smooth, there was never an opportunity to blame a missed putt on anything but your own pathetic self. Most were long and narrow, some two-tiered, and they provided a delightful challenge on a consistent basis.

Mr. Erdmann reminded me several times that the grounds crew was behind schedule, and after touring the course I wholeheartedly agreed. In the condition I played the course, the nearly $50 you'll pay to play it in peak season isn't worth it. Overall, though, the course is better than average thanks to the natural beauty of the property and the excellent greens. A nice touch is that Roses Run will send a limo to the local airport to pick you up and take you directly to the course if you're coming to play, and word is there's one heck of a party thrown every Thursday night at the spacious and relaxing outdoor patio area. But other than the limo run, there 's no other special services that might add to your experience at the course. Overall, Roses Run is worth checking out, but if the grounds crew is indeed short-staffed, perhaps the best time to visit would be mid- to late-summer after they've caught up with their tasks.

Roses Run used to be a horse farm. 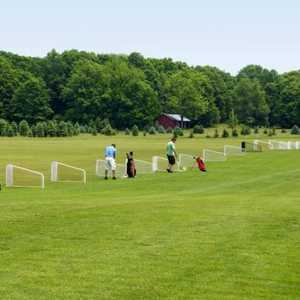 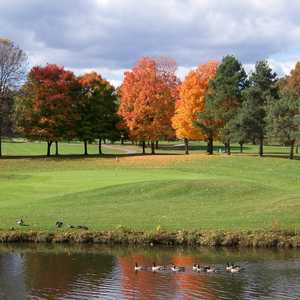