Of course we're talking about Dublin - Dublin, Ohio - that is.

True, the Golf Club of Dublin aims treating golfers to a slice of Ireland. But unlike many cheesy replica facilities that fail by excess, Dublin is effective.

For the designers, turning the bland, flat land into a links-style course was the easiest way to make things interesting. In a recent interview, golf course architect Dr. Michael Hurdzan described how certain topographical features pose problems for course designers.

"The most difficult site on which to build a golf course are dead-flat sites," Hurdzan said. "It's an artistic challenge to turn a featureless cornfield into an enjoyable, memorable golf course.

"That's why we count The Golf Club of Dublin as one of our best accomplishments. We moved a modest amount of dirt and turned a flat cornfield into what we think is a very fun course to play."

Ohio golfers also consider The Golf Club of Dublin to be a success. Even though the 7,021-yard, par-72 course has only been open for play since May of 2002, it has already become a local favorite in its short existence.

In a poll in 2003 by Great Lakes Golf magazine, readers voted the Dublin track as their second-favorite Ohio layout, right behind the critically acclaimed Longaberger Golf Club nearby.

This was a remarkable level of recognition for such a young course, whose turf had just begun to fully grow in. Now entering its fourth summer, things are only getting better. However, the round isn't cheap at $69 weekdays during peak season and $79 on weekends, holidays and not-to-be excluded Fridays.

A bit of Ireland

Hurdzan and his partner Dana Fry succeeded in overcoming the uninspiring level landscape largely by creating strategic golf holes that allow for multiple paths to par.

"Our goal," Hurdzan said, "was (to recreate) a bit of Ireland in central Ohio."

Most evident among the Irish accents are the 78 sod-walled bunkers and hundreds of yards of hand-built stone walls. The bunkers - devilish and endearing all at once - not only guard the classic, four-corner greens and punctuate the otherwise forgiving fairways.

They also serve to add an understated visual drama to the one-time cornfield. When the sun is low in the sky, the stacked walls cast illusory shadows that can make the bunkers seem either twice as deep or half as shallow as they really are depending on the angle of the light.

"Hurdzan and Fry really strove for authenticity," said Director of Sales Kimberley Meegan. "And in the last four to five weeks, the course has made the turn with respect to conditions and business."

As word gets out about this chip off the Emerald Isle, golfers are finding that the atmosphere and level of golf combine for a unique Ohio experience.

The primary goal of Dublin's staff is to immerse you in the golfing tradition. Every employee is dressed in plus-fours, white shirt and tie. And each plays the part of an historic golf personality. From James Braid to Allan Robertson, the crew will be more than happy to share with you the career achievements of their characters.

In the clubhouse, the peaked ceilings, high fireplace and dark wood interior offer the perfect atmosphere for drinks and food pre- or post-round. The pro shop and practice facilities are spacious and well thought out and service - above and beyond the slightly gimmicky role-playing - is the equal of most private clubs.

Out on the course, design features also mirror those often encountered on the Irish links, except for one thing: the proximity of housing surrounding the course. Although the actual structures are set far enough back from the fairways to keep them out of play, with 750 planned home sites, it's inevitable that some will interfere with both aesthetics and players' scores. OB is seemingly everywhere throughout some portions of the track.

At 408-yards, the par-4 first hole is a relatively gentle opener, except for the white stakes and stone walls lining both sides of the fairway. Facing OB right and left on the first hole tends to start a round off on a sour note for most duffers.

Nos. 5 (500 yards) and 6 (534 yards) are two classic back-to-back par 5s, offering birdie or better chances for big hitters. The sixth, with its rock walls, ever-present bunkering and meandering rivulet along the right side evokes images of Carnoustie - if you can block out the row of executive homes lining the fairway.

No. 7 highlights one design flaw: At 413 yards from the back tees, it's a solid driving hole. At just 310 from the regular men's tees, however, it requires no more than a 5-wood or 3-iron.

The hole is a microcosm of the course with respect to yardage. With back tees measuring 7,021 yards and the regular tees at 6,363 yards, the layout lacks an option for the large number of players who feel comfortable in the 6,500-6,700 yard range.

The 436-yard, par-4 ninth and 230-yard, par-3 17th both incorporate the picturesque stone walls. On the ninth, a wall hugs the rear fringe of the deep, undulating green. If the pin placement is back, it's a reasonable play to take an extra club and hit a long, low approach that will more than likely bounce off the fieldstone backstop and end up within one-putt range.

On the 17th, a wall runs perpendicular to the tees and green, about two-thirds of the way to the putting surface, the back side of which is guarded by water. Although neither generally comes into play, the wall short and water long provide a nice visual frame for the green.

The 404-yard 18th is not the most intimidating closer in the area, but it's nevertheless a strong feel-good finisher The wide fairway here, as on many of the other holes, is defined on the right by a pond and on the left by the ever-present stacked-sod bunkers.

In order to get a good angle into the slightly elevated green, tee shots should favor the left-hand side of the fairway. Behind the green, the inviting clubhouse rises like Brigadoon above the one-time cornfield and the promise of a cool draught stout ale might make it hard to maintain your concentration as you putt out.

The Golf Club of Dublin is mature for being merely a toddler and should improve even more in the coming years. The root systems on the greens need to thicken some yet and the turf in the fairways could use some toughening up.

Housing construction will be continuous over the next few years, however, so don't expect many days where hammers and buzz saws don't interrupt your "traditional Irish links" mindset.

These blemishes not withstanding, the new Hurdzan-Fry design is a very welcome addition to the Columbus area, which is developing into a bit of an unlikely golf destination, complete with several highly rated golf courses and a variety of accommodation and entertainment options.

If the winter stays mild, hearty duffers can even play The Golf Club of Dublin year-round at substantially reduced green fees. Not only a fine deal, but also true to the course's Irish inspiration. In fact, aside from the residential development and the rich loamy soil, there is little here to detract from the overall Irish atmosphere. 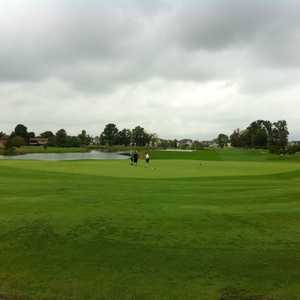 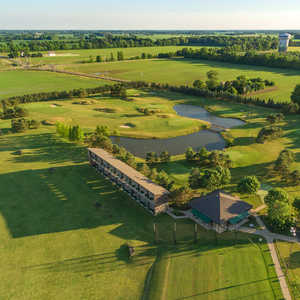 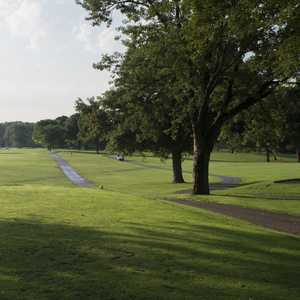