ZANESVILLE, Ohio -- There's a very good reason why golf freaks should visit EagleSticks Golf Club: Golf Digest ranked it one of the top 100 golf courses in the country in 2003.

But there are so many more reasons, too, and most are not related to golf.

Take, for instance, the quaint town of Zanesville. Take a drive through and you'll wonder why news about JFK's assassination isn't streaming out of your car radio. A lot of the store signage hasn't changed since the '60s, and the buildings themselves look retro as well.

Pottery may not give a blood rush to some people, but tell that to the local hotel managers. They forget the meaning of vacancy each year during Zanesville's annual pottery festival. It probably doesn't rival Daytona's annual bike week, but.

If you think you've heard of Zanesville before, chances are it's because of the world-famous Tom's Ice Cream Bowl. Ice cream lovers all over the country rave about this place. What a better way to melt away memories of a 98 at EagleSticks than a double scoop of pistachio, eh?

And if you're just dying to cure your jungle fever, you're in luck. One of the world's largest wild game preserves, The Wilds, is just down the road in Cumberland. You can go native with rhinos, giraffes, camels and gazelles that are running around on 9,154 acres of land.

The attractions hardly stop at the Dr. Mike Hurdzan-designed EagleSticks. Most golfers miss it the first time around, but ask the pro about the cemetery on the first tee. That's right, the cemetery. Make that a pet cemetery, one that would have Stephen King eating his heart out. Built on the site of the McClelland family's horse farm, the golf course left the resting places of Dad's favorite hunting dog Boots and trophy trotters OK Mac, OK Dick and the Little Champ untouched. Don't worry - it's nearly impossible to hit your ball behind one and have to take a drop from a definitely immovable obstruction.

Another reminder of EagleSticks' rural heritage is on no. 11, a hole that was rated by Golf Digest as one of the "Best 18 Holes You Can Play" in 1997. A 591-yard par-5, it plunges downhill and over a creek, then twists around a stand of sycamores to a wide but shallow green. Along the way is an old corncrib (for you city folk, that's a place where you store ears of Indian corn) that was converted into five tin-roofed walking bridges for golfers.

On the scorecard, EagleSticks may look like the kind of course you can take behind the woodshed and horsewhip, but think again. The fact that it only plays 6,124 yards from the blue tees and has five par-4s under 350 yards doesn't mean you'll automatically be walking away at the end of the day with your best score ever.

"The large, undulating greens put a premium on your short game," says Head Golf Professional Kelly Morrow. "Plus, the rough is severe enough and there are enough hanging lies to make it tough to score well."

Like many public upscale golf courses, EagleSticks has faced increasingly stiff competition since opening in 1991 and being one of only two such courses in Southern Ohio. The audience then was anyone who wanted the country club experience for a day. Now, "it's whoever we can get out here," Morrow says.

Because of competition, EagleSticks has had to cut costs and do more with less. As a result, customer service has declined a bit. Depending on what time of the day you arrive, there may not be someone there to grab your clubs out of the trunk for you. The driving range is pretty basic, and the on-site restaurant/bar, Mac's, is average at best.

On the plus side, you'll be paying the same greens fees as you would have in 1997. GPS is available, although you'll pay for it after the first two holes. And ,unlike a lot of new courses, EagleSticks isn't built around a housing development, so there's no chance your ball will end up in the martini glass of some yuppie reading the Wall Street Journal on his stamped concrete patio. 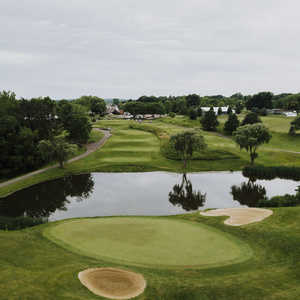 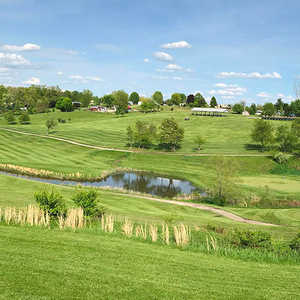 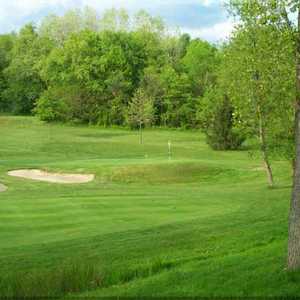