NORWALK, Ohio - Norwalk may be best known for the drag-racing that occurs at its very own Norwalk Raceway Park, advertised gaudily on the radio by a maniacal, spastic announcer who excitedly shouts, "Sunday, Sunday, Sunday - don't miss the thrill of your life at NORWALK RACEWAY PARK!"

But the small town a little more than an hour west of Cleveland holds its own in the golf arena as well, namely because of a challenging and well-kept course named Eagle Creek Golf Club.

Being quite a distance away from a major city, developers knew it might be a challenge to draw the sort of numbers that would keep the course in the red. So even though some people detest golf played in the presence of nearby houses, the decision was made to pair residential housing with the linksland.

"That's what we had to work with," General Manager Gary Wilkins said. "And the houses definitely help defray the costs."

The houses hardly play a role on the front nine, but the back nine is another story. On the par 4 374-yard 13th hole, you may feel as though you're part of someone's backyard barbecue.

However, there are courses that are more undignifiably crammed between yuppie abodes (see Rose's Run). Golfers will tend to overlook the occasional infringement on someone's property at Eagle Creek because of the distinctive challenges set forth and the above average conditions.

Perhaps most unique about Eagle Creek is the bentgrass fairways, which aren't like straight driveways, but instead meander down the hole. Often they squeeze landing zones to give the rough more of a chance to swallow your ball.

"We sculptured the fairways because we just hate straight lines," Wilkins said. "Plus, it's more appealing to the eye and makes a nice target. We like to say the only straight line on the course is the flagstick."

Also different is the large expanse of fringe on the open mouths of the greens that allows golfers to choose from a variety of pitch shots to attack the flag. One almost thinks links-style because of this feature, although Wilkins points out one difference.

"Links courses generally don't have trees, which we do," he said. "I'd say it's more of a parksland course with only a few holes that demand forced carries. And on most holes you have access to the green."

True enough. The course won't overwhelm you with bunkers (there are 35), nor will the greens cause you fits. None have the "elephant mounds" that can sometimes make you wonder if you're playing miniature golf.

"When (Brian) Huntley built the greens, I told him I wanted people to feel like they could make a putt," Wilkins said. "I didn't want them to feel like their work was just starting when they got there."

There were funky looking discolored patches on the greens, which weren't aesthetically pleasing, but never once threw a ball off line. Wilkins said it's called fairy ring and typically occurs when greens are stressed, as they have been in Ohio this summer due to extremely high temperatures and little rain.

The lack of rain was evident in the rough and fairways as well, as they weren't the emerald green they usually are after a wet spring in Ohio. Wilkins attributed it to problems with the water pump.

"The last two years we've had so much rain we haven't had to use our reservoir," he said. "Now that we have had to pump water from it, we've had problems. We've had 12 days over 90 degrees already (by June 19) and only a half-inch of rain."

Even though Eagle Creek's yardage won't rattle anybody (6,603 yards from the tips, 6,234 from the blacks and a paltry 5,835 from the whites), the course is hardly a creampuff.

Take no. 4, for instance, a par 4 of 306 yards. It features a sharp dogleg left, but a copse of tall trees prevents Paul Bunyans from going for the green off the tee. The smart play is a long iron off the tee to leave about a 100-yard approach shot.

Even though none of the holes are overly long, each packs its bite in twisting and turning fairways, some subtle and some severe.

"I thought it was an above-average course," said Terry Laband, a 20-handicapper from Cleveland, who has played such stellar tracks as Harbour Town Golf Links in Hilton Head and Lahinch Golf Club in Ireland. "It was challenging without being overly long."

Eagle Creek is definitely a course where familiarity pays off. Despite signs on appropriate holes that offer advice as to how far to hit the ball off the tee, it will take a few rounds to grab clubs with confidence. On that end, it would have been nice to have GPS in the carts, but then again, the green fees would be higher.

Eagle Creek is definitely worth checking out. Wilkins' comment that "it's a $75 course that only costs $48 (weekends)" is right on the mark.

A well-stocked golf shop, exceptional practice range, killer golf cars (not to be underestimated - how many times have you rented a clunker that barely moves faster than your grandma) and smooth car paths add to the experience. Of course, in a perfect world the houses would disappear and the course would be a little greener, but the creative layout and nice scenery more than make up for those things.

Golf Digest gave this course a rating of 4 1/2 out of five stars. 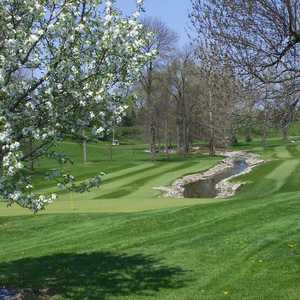 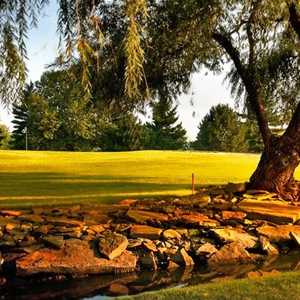 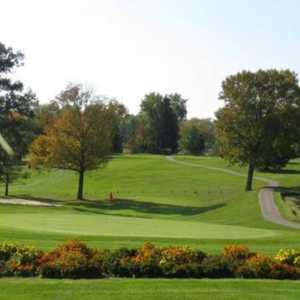